Nowadays, the graphic presentation of events, lists, formulas, and statistics, has gone through considerable development, with its processes reach- ing a high degree of sophistication, bringing together disparate fields and disciplines. These new processes have taken shape with their own particular at- tributes, leading them to be considered as an art discipline in their own right. Some of the symptoms of this magnitude were the 2006 edition of Artfutura, a digital culture festival, which revolved around the idea of ‘Data Aesthetics’ (De Vicente, 2006)[1], and the on line project called VisualComplexity (Lima, N.d.) [2]. The latter claims to be a unified space of resources for anyone interested in the visualisation of complex networks. The main aim of the project is to reach a critical understanding of the different methods of visualisation used by multiple and disparate disciplines.
Faced with this fact, and considering my participation as a member of the research team called Imarte, I thought about developing a line of work about these processes within the art context, with the aim of facing the writing of this text and intentionally avoiding writing a conventional article. I began this experimentation with three texts that were part of the panel discussion Database Visualisation, which I presented and coordinated at the Expanded Print symposium. As well as texts by Esteban de la Monja, Daniel Jacoby and Marcel Pie, I have also included Lev Manovich’s key text, Data Visualisation as New Abstraction and Anti–Sublime, thinking about this text as a reflection that represented a turn- ing point around this subject, and about the other three texts as interpretations of databases, from the point of view of artistic practice. In order to develop these approaches, I have taken databases to be a compound of data belonging to a context, systematically stored for later use.
My aim is to present a summary of the contribution each author made, as a specialist within his field. The result that follows is the use of every word contained within the afore–mentioned articles as a database, to generate a new text derived from a selective process based on the idea of ‘repetition’. The final text is a selection of words that appear in all four texts, and that are reconfigured based on new pre–established orders. These repeated words are formally transformed, by increasing their typographic size. In this way, what we finally visualise is a continuity of words whose size varies depending on how often they are repeated, like in the popular Widget Tagcloud.
Description of the Computing Process
1. Each text is read, and in each text: (a) the following symbols areerased:,.“()[]<>:?¿!¡ %,(b)repeatedwords are erased (but their first appearance is maintained) and © con- junctions, articles and prepositions are erased.
2. Based on Manovich’s text, every word (in order) is searched in the other (processed) texts: if it doesn’t appear in any of them, it is erased; if it does, the number of times it appears is counted and added to the resulting text according to the number of repetitions.
3. The output document is generated. 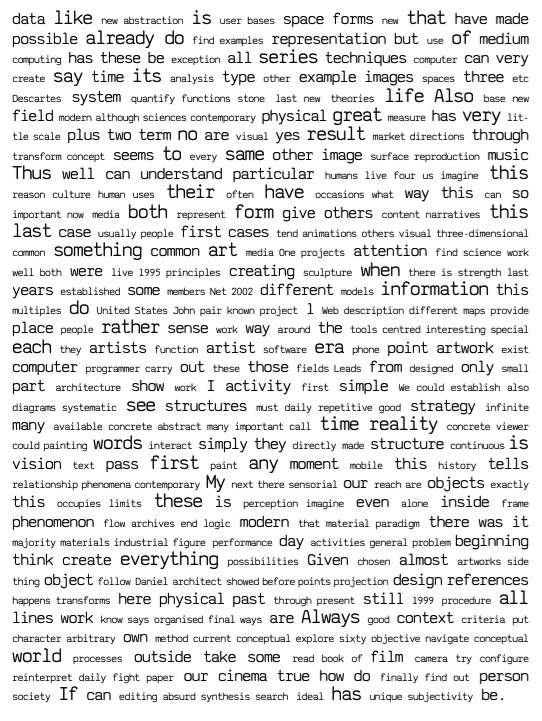